I've been fascinated by Atlantic puffins since first encounters with them on the Isle of May when I was fourteen. By good fortune, I was able to study them on the island as part of my psychology degree. After that, but still based in what was then the Psychology Department at the University of St Andrews (now the School of Psychology & Neuroscience), puffins on 'The May' and St Kilda were the focus of my PhD. Since then, puffins have drawn me to visit many of the major colonies around the Atlantic and north to Iceland, arctic Norway and Svalbard.

So I think that's how I came up with the term 'puffinology' many years ago, to describe what I was doing - a blend of science and passion for a species and the places where it breeds. I've since used the word in print and now see it starting to pop up in other writing by other people, which is fun.

There's another puffin-linked word which I didn't coin, but can claim to have helped back into (very) wide use: puffling. This refers to the puffin youngster, both fluffy nestling and sleek, ready-to-fly fledgling. Ronald Lockley used it in his book 'The Puffin' several decades ago (I don't know if he invented the word, or found an old reference to it). Then it fell into disuse. Thanks to various media projects, including a Wildife on One film that I co-scripted, narrated by Sir David Attenborough, the word began to tickle a wider public once more. There's even a book which uses it in its title, and several youtube film clips. So - The Puffling Has Taken Flight - once again.

Puffinology has lured me to many amazing places around the rim of the North Atlantic, including the major puffin breeding areas in both north-west Europe and North America. I've kept an interest in puffin behaviour (both of individuals and large groups) throughout, including by being able to watch puffins at colonies I've visited for different radio, TV and magazine assignments. 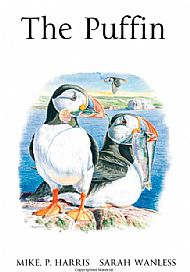 Recently, it was a privilege to re-visit and re-write my chapter on puffin behaviour for the second edition of 'The Puffin' by my puffinology mentor, Mike Harris and his co-author and partner, Sarah Wanless. Reviewing the scientific literature before the re-write, I was surprised at how few studies of puffin behaviour there have been over the last few decades. So I hope to keep banging the drum in different media to encourage people to look more closely at this fascinating bird, which is arguably among the most iconic of all seabirds.

This little seabird's potency as an icon means that puffinology is more relevant than ever, to draw attention to both the beauty and complexity of the oceans, and the fragility of marine systems at a time of rapid warming.